What’s For Dinner?: The Food of ‘Killing Eve’ Season 2

You may think Killing Eve is about obsession. You may even think it’s about finding out who The Twelve are.

Well, I’m here to tell you that like all good things in life, it’s about the food. And not just food, but women eating food. Last season, I made a case that

Villanelle is the consummate foodie

Season 2 only further proves that thesis. But it’s not just Villanelle who indulges this season because METAPHORS! Even moreso, lead writer Emerald Fennell gave us a virtual smorgasbord of snacks and treats to feast our eyes on. Her last name is Fennell after all (Yes, I know it’s spelled differently — work with me here!)

In EPISODE 1, both Eve and Villanelle give in to their sweet tooths. Eve houses some candy she fights a kid for (

being terrible to children, you say?

A hospitalized Villanelle goes for lollipops and candy too before grabbing a forbidden fruit, or rather, an apple!

The dish of the episode, though, is Eve’s attempt at Nigella’s Chicken with Lemon and Rosemary Stuffing. As an American, I immediately thought, “Why wouldn’t she make Ina’s?!” And obviously by Ina, I mean Ina Garten. But, let’s not forget Eve may be American but she lives in London, so Nigella’s it is. And presumably

is the recipe she’s referring to, which is available in her cookbook, Simply Nigella.

As another expat Meghan Markle once told Good Housekeeping, “There is nothing as delicious (or as impressive) as a perfectly roasted chicken. If you have an Ina Garten-level roasted-chicken recipe, it’s a game changer.”

I couldn’t have said it better myself.

Like candy, roast chicken is comfort food. But something tells me Eve wasn’t feeling very comforted… 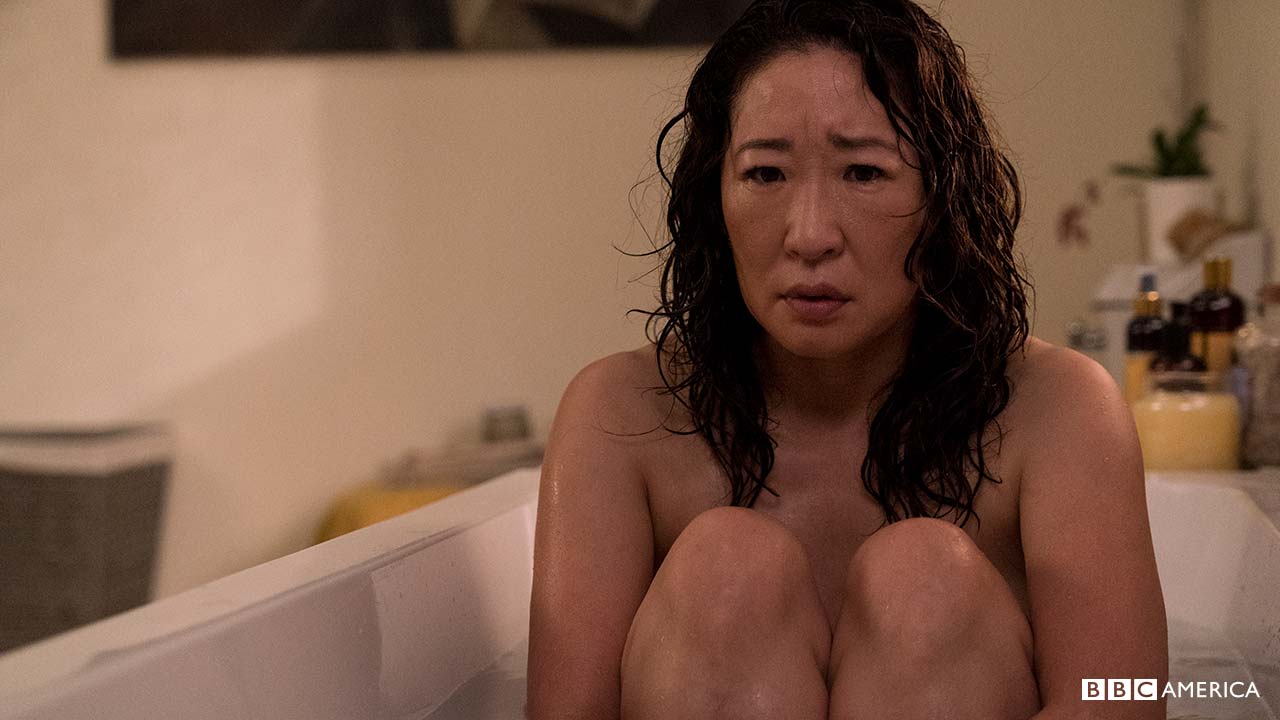 …and that is for an ultimate British classic — the lemon drizzle.

Mary Berry would be so proud

. Let’s hope Julian doesn’t heat it up! Requesting a lemon drizzle, again, is comforting and sweet, but is also quintessentially British — something Villanelle needs Julian to believe she is. And because you didn’t ask, I’m just sharing this recipe for

with you because I prefer it to lemon. Don’t judge!

EPISODE 3 sees an attempt at a domestic Eve once again as she brings Niko an omelette in bed. While watching both seasons of Killing Eve, I don’t know that I thought much about Eve and Niko’s cooking. But if you’re like me and see cooking as a way of showing one’s love, a Shepherd’s pie and omelette start to mean a whole lot more. You’re literally feeding someone, providing them with something they need. It’s very telling when Villanelle traps Niko and asks for his Shepherd’s pie recipe — a dish she’s only experienced bastardized in the microwave.

It’s also very telling when Villanelle screams in Season 1 “I just want to have dinner with you.” Yes, they’re amusing moments, but it shows that Villanelle understands the significance of food and being that person for Eve.

Episode 4 might be the most gluttonous episode of them all. It begins with a classic scene where we meet Carolyn’s Carolyn, Helen, and her can of Pringles. We later see a stalking Villanelle dive into a bag of chips. Is there anything more satisfying than seeing real women snack?!

And while Eve goes savory with a fried chicken recommendation from the sly Hugo, Villanelle introduces us to Dutch delicacy Hagelslag! I had never heard of this before but as someone who insists on putting sprinkles — or “sprinks” as I call them — on everything (seriously, my fiancé gifted them in my stocking this past Christmas), I can’t wait to try it. And I can’t think of a better way to describe what Villanelle does for Eve — Villanelle is the sprinks to Eve’s white bread.

Oh, and don’t forget the bacon 😉 Almost everything is better with it.

Episode 5 begins with a pretty gruesome kill in a car wash, but even that can’t kill Villanelle’s appetite as we see her sipping what looks like a strawberry milkshake. Villanelle knows that strawberry is a highly underrated flavor. (Don’t @ me.) Later, as Villanelle is seen waiting for Konstantin in what we later find out is a meeting to receive the directive to target Eve, she is seen finishing an ice cream cone because in Villanelle’s world, as in mine, ice cream is everything. I’d like the record to show we’ve only seen Villanelle in workout clothes once this entire series, sooo I hate her.

Perhaps the most telling indulgence in this episode, however, isn’t food at all, but beverage, namely alcohol. First, we see Villanelle order a bottle of champagne for one, and in the very next scene we see Niko swigging a beer. The juxtaposition is clear. This is a pivotal episode because Villanelle and Eve finally meet again, in the kitchen no less. (Isn’t it interesting how they always come together in the kitchen?) Villanelle finally has someone to share her champagne with… in coffee mugs, as Eve and Niko don’t own glassware. Yes, I’m judging them. *Cue Beyoncé’s “Upgrade U.”

Eve and Villanelle have made something of an indecent proposal, but the next episode, Episode 6, is a cornucopia of amazing moments of probably my two favorite characters — Carolyn and Konstantin — and that’s all I care about. Episode 6 has a lot of opinions about eggs. Konstantin offers drachona to Carolyn’s latest bedmate. He describes the egg and sour cream dish as “restorative.” Someone tell Gwyneth!

Drachona is something like a baked omelette, and as someone who’s never had it before but loves Normandy omelettes (or

), this might be right up my alley. But what we learn later is… Carolyn hates eggs for breakfast!  Sorry, Konstantin.

We learn even more about Konstantin’s food habits when we see him snacking on popcorn during the stakeout outside Aaron Peel’s house. Like handler, like assassin.

And let’s talk about what happened in Aaron Peel’s house. We don’t quite know what “Billie” was served for dinner, but we do know is there was gravy:

Ooh, a little bit a Bisto.

A little bit a Bisto!

A little bit a Bisto, please?

A little bit a Bisto.

I meaaan. What the heck is Bisto, this confused American viewer asked? Thank you,

Apparently, Villanelle left hungry enough that she had to stop into a shawarma shop, where the man behind the counter tells her, “People will eat anything if you cut it thin enough and put hot sauce on it.” Nothing quite sets a food snob like Villanelle off like a statement like that. At first I thought she followed the two girls that enter the shop because they were basic and cut her in line (which we know she hates.) But I now realize that she thinks they deserved it because they don’t have culinary standards. You better hope Villanelle’s not around when you feel a hankering for some questionable street meat!

Before long, Villanelle is back in the lap of luxury. Now, don’t think the kiwi Villanelle is about to enjoy at the beginning of Episode 7 is all we’ll get (eat more kiwis! they’re delicious!), because the greatest pasta easting scene of all time is imminent. Although it

, that pappardelle looked nothing short of LUSCIOUS.

And Aaron has already figured out the way to Villanelle er Billie’s heart — through her stomach. We don’t learn what pasta dish it is, but we do know it’s only available one week of the year. We also know it’s not in a red sauce. My deductive reasoning is telling me that the dish might have white truffle in it. They’re only available a couple months of the year,

and could possibly impress a food snob like Villanelle in a way other truffle stuffs might not. In Josh Ozersky’s piece on the luxury mushroom, he quotes Chef Alex Guarnaschelli as calling them “sublime.” And that’s exactly the look in Villanelle’s face when she eats them.

We also know white truffles are native to Italy (the place Aaron is trying to convince Villanelle to travel to) and are foraged or hunted… by pigs.

But in this moment and even moreso in the season finale, we learn that for Aaron, food is much more about control than it might be for Villanelle. He orders her food. He tells her what kind of gelato to order. He tells her to stop eating a chocolate-orange truffle because he hates that combo. (I’m in favor, by the way.)

And so, it’s perfectly appropriate that Mr. Peel ultimately finds his demise at the breakfast table with the same knife originally used for the country ham. In Villanelle’s world, men are pigs.

With Aaron and eventually Raymond, Carolyn, and Konstantin out of the picture, Eve and Villanelle are out on their own. But you know what they say, all work and no play make Villanelle a hungry woman. And in Season 2’s final scene, as Eve and Villanelle finally break through to the ruins of Hadrian’s Villa, the first question out of Villanelle’s mouth is, of course, “What do you want for dinner?”

How companies use the Myers-Briggs system to evaluate employees-Marketplace