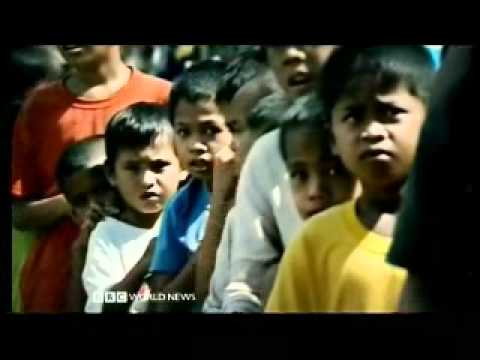 Simon Reeve leads a team of journalists on a journey of discovery in the Philippines, from the staggering scenery of the mountainous rice terraces in the north, to the war-torn Muslim regions of the south.

In the capital, Manila, population pressure has led to some surprising consequences. The city’s largest cemetery has become home to a thriving community, who look after the tombs of the rich but also have their own schools and shops. The country is still in some political turmoil and a long-running communist insurgence has led to allegations of illegal killings by the army. Simon meets a general known as ‘The Butcher’.

Simon also has a surreal encounter from the past – an interview with Imelda Marcos, who is marketing a new line in beauty products. It’s a stunning country with bizarre wild life and a population of tropical ‘Sea Gypsies’ whose lifestyle is feeling pressure from the modern world..

For more information, see and and . To join the “Lonely Planet Travel Forum”, see .

Performance FROM FASHION TO ART – Teaser

Mark Wright on UNBELIEVABLE form! | Soccer AM Pro AM

Hearthstone is a finished game 2