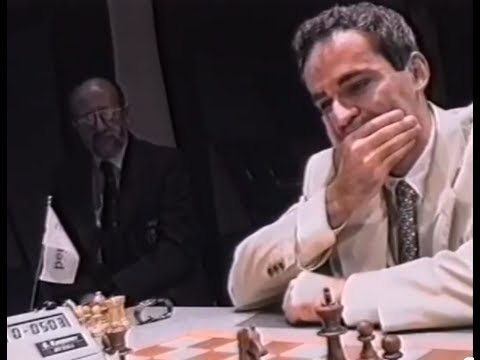 Daniel King commentating on Garry Kasparov at the Intel Grand Prix at the peak of his career 😍 One of the most expensive chess video series ever made, what could be better! Get instant digital access to the rest of this 7 hour chess series – with 35% off!! ►

When the first round of the Intel Chess Grand Prix 1994 in London paired Garry Kasparov against the only chess computer in the Super GM competition, everyone expected an easy victory for the chess world champion.

The computer was called “Chess Genius” and needed to pass a BIG test if it was going to live up to its name. The Garry Kasparov vs computer mini-match consisted of 2 games with 25 minutes for each player.

Kasparov had White in the first game and started using his “anti-computer” strategy of trying to create long-term positional weaknesses. He was even seen giving funny looks when the computer played “positionally bad” moves, as though mocking his opponent’s strength. Garry offered a trade of queens, seeing that he would enjoy more activity in the endgame, something that the computer wasn’t supposed to be able to “see”.

But Chess Genius DID see it and rejected the queen trade, instead maneuvering to a protected central square and offering a queen trade of its own a few moves later! This time the trade would favor Black, giving Chess Genius a passed pawn. Kasparov reluctantly moved his queen to a passive position and Black started cleaning up! By the time the queens were off, Chess Genius was 2 pawns up in a knight endgame and found precise moves to thwart any attempts at counterplay by the world champion.

Richard Lang, one of the programmers of Chess Genius, said about the victory: “I was absolutely overjoyed that the program managed to beat a human world champion and eliminate him from the competition. No computer has done that before – it was quite historic. It was the victory I have been working towards all my life.”
In the second game, Garry got the advantage but couldn’t find a way through, with the computer putting up maximum resistance. Final score: Chess Genius 1.5 – Garry Kasparov 0.5! For the first time, the World Champion had been beaten in a competitive match by a computer!

► Corresponding article from this video with extra goodies:

►This game was played in a Caro-Kann:

► Come checkout the iChess.net shop, we have the world’s largest collection of chess videos and chess courses:

Checkout our most recent video:

Your health is governed by your Environment | Prof. BM Hegde | TEDxIITHyderabad