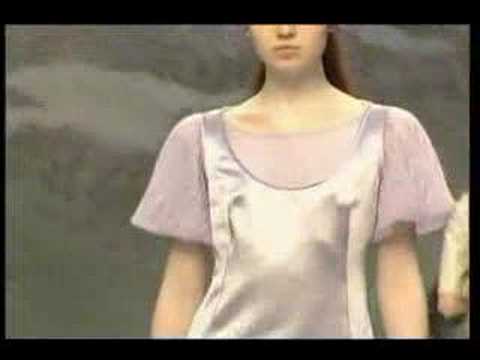 Welcome to a new phase of fashion show. Japan fashion week is on its fourth day on Thursday (March 13, 2008), and one Japanese designer revealed her collection with a high-tech twist.
What seemed like a white couture dress suddenly turned blue using blue light-emitting diode often known as LEDs. It is considered a cheaper,
long-lasting and energy efficient alternative to normal light bulbs and is widely used on displays and lighting.
“I wanted to illuminate the white dress in pale blue and LED reflected the perfect amount of wintery light,” Ritsuko Kato, designer of “ELE TRA,” proudly told Reuters in midtown Tokyo.
Kato collaborated with a local installation director in order to find
the best way to light her collection. They experimented with every lighting
possible to create a dreamy and magical atmosphere. After several failed attempts, the team came up with an idea to wire blue LEDs underneath the white
couture dress.
Models, including Japanese top model Ai Tobinaga, also shined the catwalk with pastel-colored dresses, fur boots and even earmuffs. Kato worked closely with the makeup artists making sure that the models looked like ice princesses and winter babydolls.
Light snow and endless applaud from the audience filled the finale as guests left the high-tech winter wonderland in excitement.
“I’ve seen lighted couture dresses at museums before, but nothing quite like today’s. It was amazing!” Risa Takagi, 28, fan of “ELE TRA” told Reuters.
Though a total of twelve models in thirty-eight garments strode down
the runway, many guests had only one thing in mind.
“I thought it was going to be just another couture dress until I saw the lighting, which really matched the wintery theme,” said Akiko Miwa, 19, still bewitched by the surprise.
The first high brightness blue LEDs were invented by a Japanese engineer at Nichia Corporation in 1993, but most guests had no clue where the high-tech lighting came from.
Kato launched her own collection “ELE TRA” last year in order to introduce a luxury brand for women who are pretty, classy and fashion conscious. Prior to the launch, she has been working as a chief designer for various brands including Kate Spade, OLD ENGLAND and TITE of JIONE SHOJI.