. Lents is the leftmost crater of the pair – next to Lents C (also note the rayed crater Pierazzo east of Lents C, that Danny Caes gives mention to below). Calibrated by

).
The eastern sunlit inner slopes of Lenz, Lenz C, and nearby Pierazzo were captured near the lower margins of Lunar Orbiter V photographs

The bright ray craterlet near Lenz, photographed by Chang’e 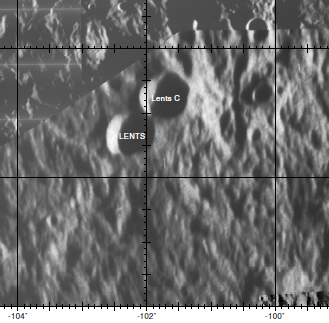 USGS Digital Atlas of the Moon