JERUSALEM, May 7 (Reuters) – Israeli police fired rubber bullets and stun grenades towards rock-hurling Palestinian youth at Jerusalem’s Al-Aqsa Mosque on Friday amid growing anger over the potential eviction of Palestinians from homes on land claimed by Jewish settlers.

Tension has mounted in Jerusalem and the occupied West Bank during the Muslim holy month of Ramadan, with nightly clashes in East Jerusalem’s Sheikh Jarrah – a neighbourhood where numerous Palestinian families face eviction in a long-running legal case.

Calls for calm and restraint poured in on Friday from the United States and the United Nations, with others including the European Union and Jordan voicing alarm at the possible evictions.

Tens of thousands of Palestinians packed into the hilltop compound surrounding the mosque earlier on Friday for prayers. Many stayed on to protest against the evictions in the city at the core of the Israeli-Palestinian conflict.

But following the evening meal that breaks the Ramadan fast, clashes broke out at Al-Aqsa with smaller scuffles near Sheikh Jarrah, which sits near the walled Old City’s famous Damascus Gate.

“If we don’t stand with this group of people here, (evictions) will (come) to my house, her house, his house and to every Palestinian who lives here,” said protester Bashar Mahmoud, 23, from the nearby Palestinian neighbourhood of Issawiya.

‘CALM DOWN AND BE QUIET’

An Aqsa official appealed for calm on the compound through the mosque’s loudspeakers. “Police must immediately stop firing stun grenades at worshippers, and the youth must calm down and be quiet!”

Israel’s Supreme Court will hold a hearing on the Sheikh Jarrah evictions on Monday, the same day that Israel marks Jerusalem Day – its annual celebration of its capture of East Jerusalem during the 1967 Middle East war.

The Palestine Red Crescent ambulance service said 108 of the Palestinians injured were taken to hospital, with many hit with rubber-coated metal bullets.

One of the injured lost an eye, two suffered serious head wounds and two had their jaws fractured, the Red Crescent said. Most of the rest of the injuries were minor, it added. 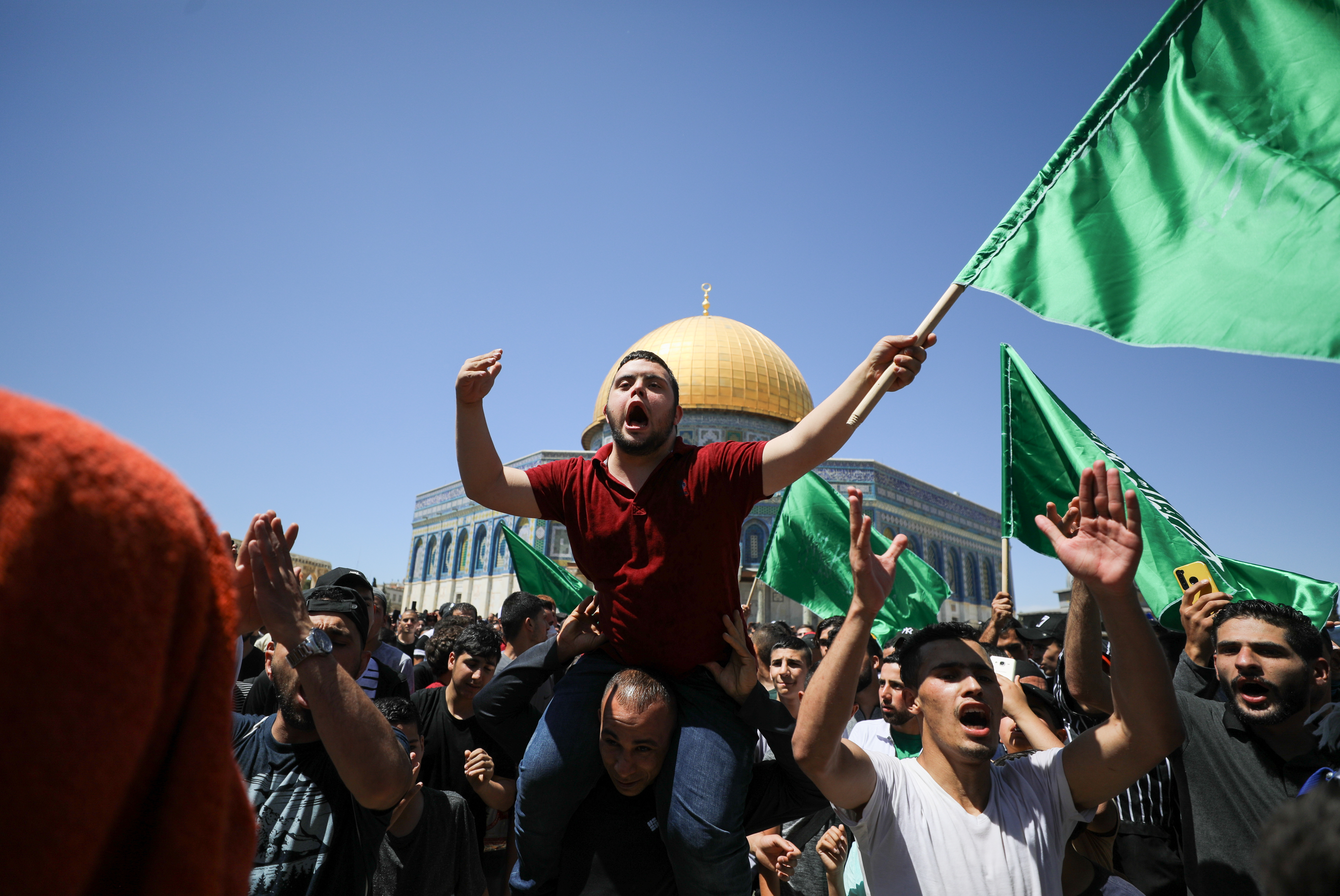 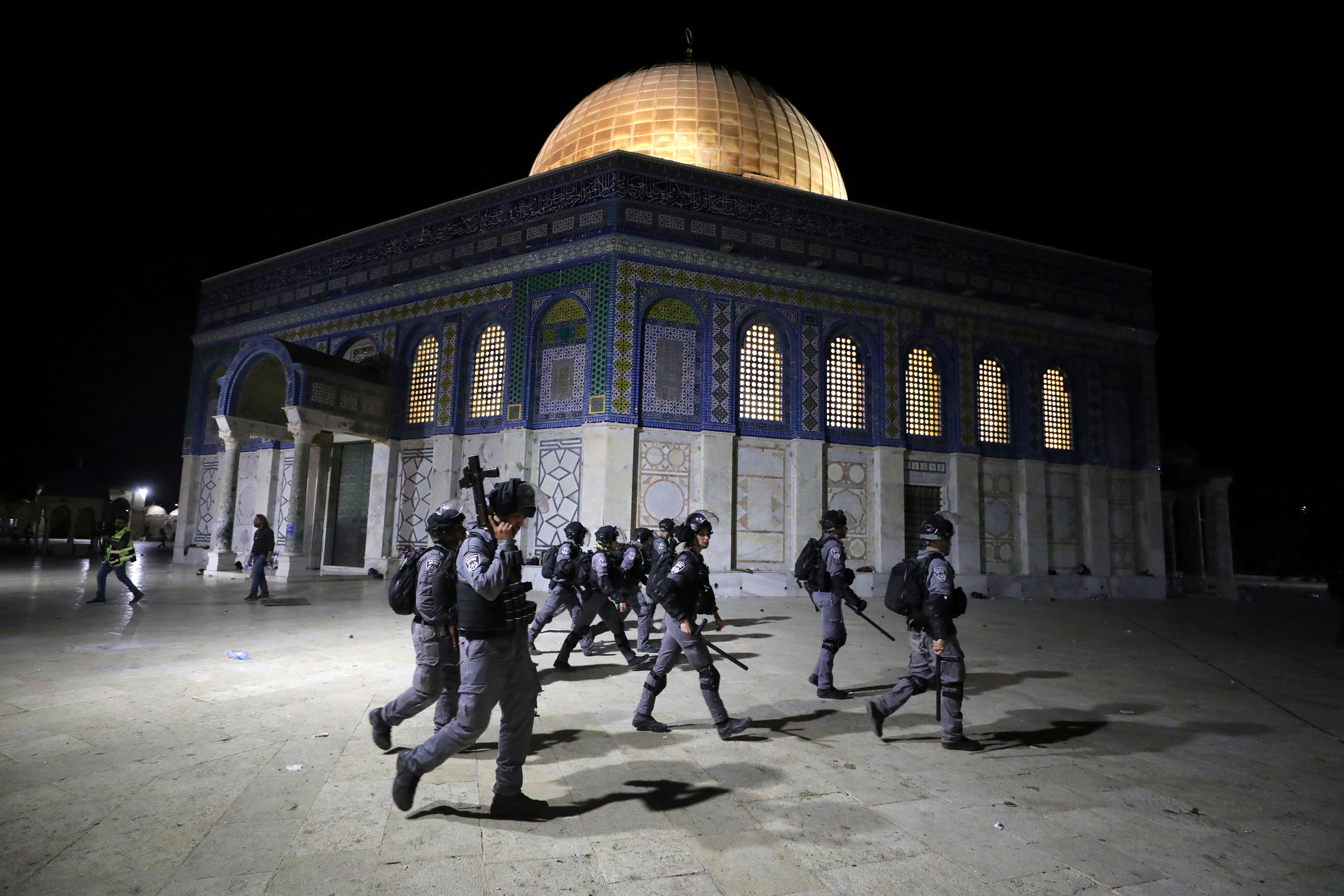 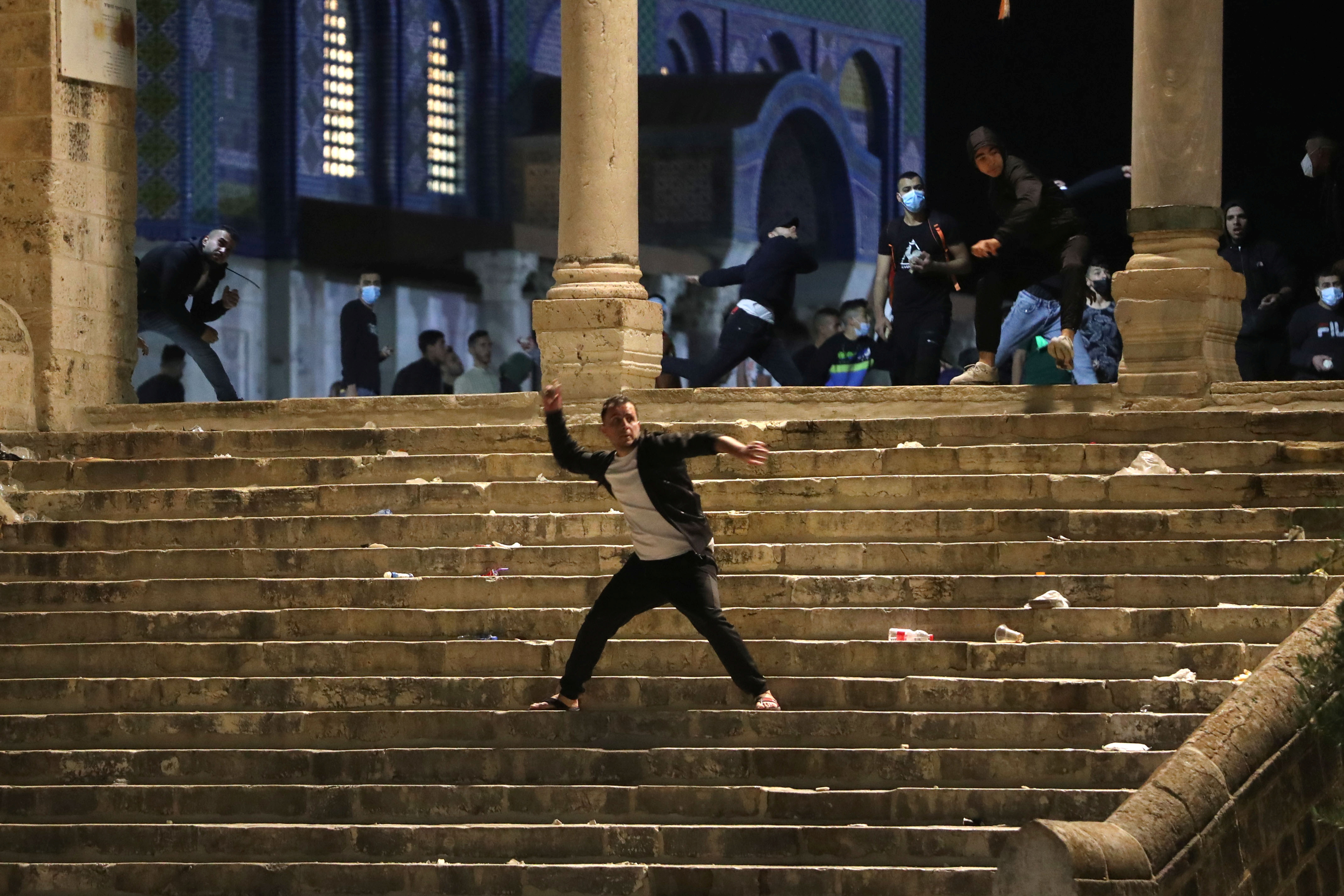 Israeli police walk near the Dome of the Rock during clashes with Palestinians at a compound known to Muslims as Noble Sanctuary and to Jews as Temple Mount, amid tension over the possible eviction of several Palestinian families from homes on land claimed by Jewish settlers in the Sheikh Jarrah neighbourhood, in Jerusalem’s Old City, May 7, 2021. REUTERS/Ammar Awad

A police spokeswoman said Palestinians had thrown rocks, fireworks and other objects towards officers, with about half of the 17 injured requiring medical treatment in hospital.

“We will respond with a heavy hand to any violent disturbance, rioting or harm to our officers, and will work to find those responsible and bring them to justice,” the spokeswoman said.

Palestinian President Mahmoud Abbas said he “held (Israel) responsible for the dangerous developments and sinful attacks taking place in the holy city” and called on the U.N. Security Council to hold an urgent session on the issue.

Violence has also increased in the occupied West Bank, where two Palestinian gunmen were killed and a third critically injured on Friday after they opened fire at an Israeli base, police said.

After that incident, Israel’s military said it would send additional combat troops to the West Bank.

Sheikh Jarrah’s residents are overwhelmingly Palestinian, but the neighbourhood also contains a site revered by religious Jews as the tomb of an ancient high priest, Simon the Just.

The spokesman for the U.N. High Commissioner for Human Rights said the evictions, “if ordered and implemented, would violate Israel’s obligations under international law” on East Jerusalem territory it captured and occupied, along with the West Bank, from neighbouring Jordan in 1967.

“We call on Israel to immediately halt all forced evictions, including those in Sheikh Jarrah, and to cease any activity that would further contribute to a coercive environment and lead to a risk of forcible transfer,” spokesman Rupert Colville said on Friday.

“As we head into a sensitive period in the days ahead, it will be critical for all sides to ensure calm and act responsibly to deescalate tensions and avoid violent confrontation,” Porter said.

The European Union, Jordan and the six-member Gulf Cooperation Council have expressed alarm at the potential evictions.

Jordanian Foreign Minister Ayman Safadi said Jordan had given the Palestinian Authority documents that he said showed the Sheikh Jarrah Palestinians were the “legitimate owners” of their homes.

Israel’s “provocative steps in occupied Jerusalem and violation of Palestinian rights, including the rights of the people of Sheikh Jarrah in their homes, is playing with fire,” Safadi said in a foreign ministry statement on Twitter.

Israel’s foreign ministry said on Friday that Palestinians were “presenting a real-estate dispute between private parties as a nationalist cause, in order to incite violence in Jerusalem.” Palestinians rejected the allegation.

Reporting by Rami Ayyub; additional reporting by Ali Sawafta in Ramallah and Stephanie Nebehay in Geneva; editing by Philippa Fletcher